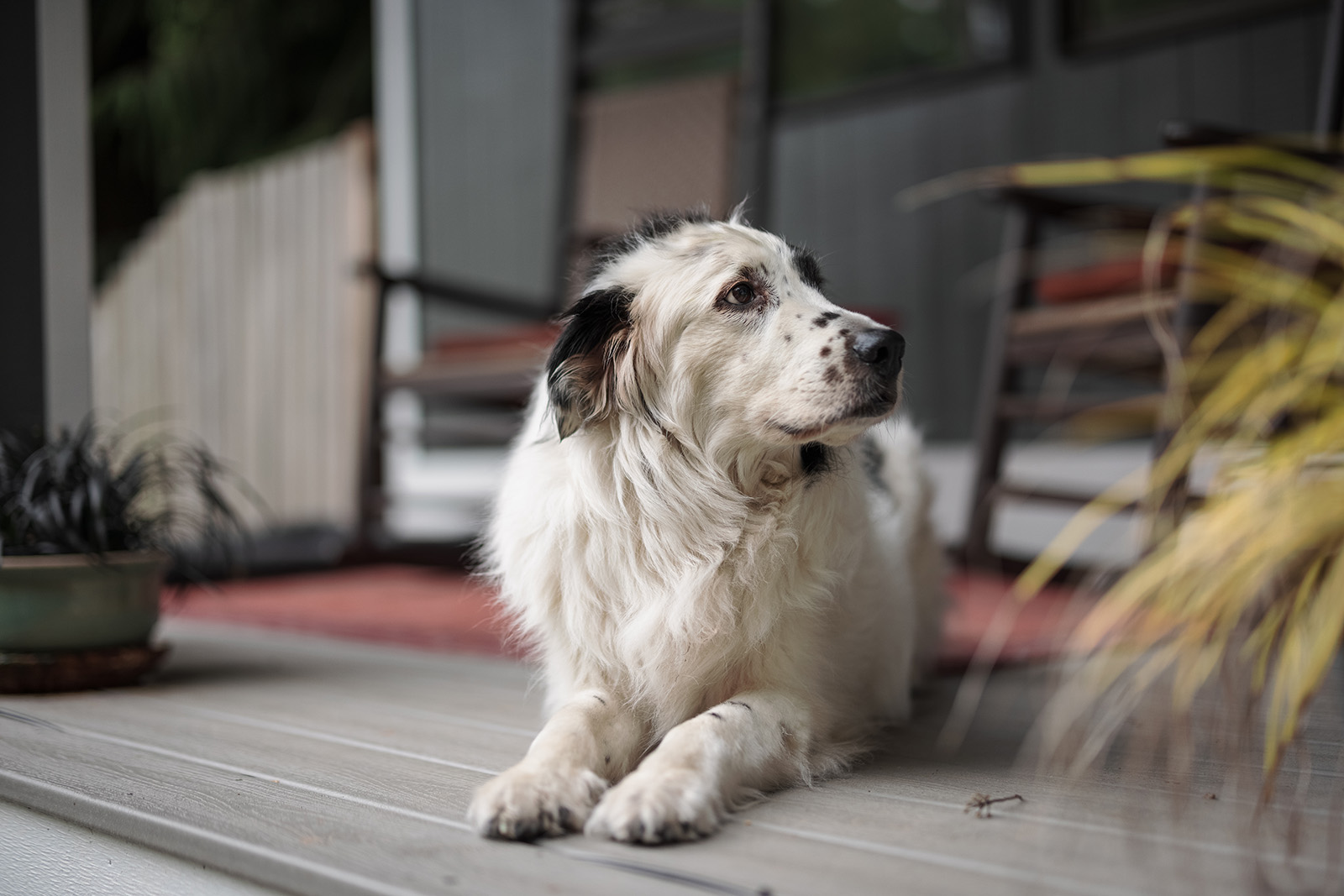 When my daughter was in diapers and my son was still far shorter than his mom, we went to a pet rescue. We happened upon a border collie mixed with a great Pyrenees. Our assumption was that one breed would mellow out the other. In retrospect, when he jumped the fence and then immediately into my son’s arms we should have known that he skipped the “mellow” part of his heritage. He’s a giant border collie.

The kids named him Storm because of his coloring. And then the thunderstorm season hit Colorado and we realized how ironic that name was. He was scared shitless of thunder. And fireworks. And the fire alarm. And lots of other noises.

But he is a good dog. He begs too much, but you could spin that and say we feed him too much off our plates. I like to put the blame on him, but you read it the way you want. He is, by far, the smartest dog we’ve ever had. And, for a time, he was an incredible athlete; a good dog to run with. Not a great dog though because for the first four miles he’d pull my arm out of its socket, and after that he was useless. I tried to get him to learn to chill, but he never did. Still, we had fun.

Fast forward his expected lifespan plus a few more years. He definitely doesn’t run anymore. His back legs only work sometimes, and our daily walk has become our bi-weekly walk. And even then, we can’t do the victory lap anymore, it has too many hills—we either walk to the water (very short) or the cul-de-sac (also short).

Anyway, enough about him, this is about me.

I’ve been 39 for more years than I’ll admit. I never thought I’d mind getting old. I was the youngest of my family, the youngest of my friend group, I always wanted to be older. But one day it dawned on me that I couldn’t eat a large pizza and drink a few a beers without repercussions. And then I’d go for a run with a bunch of twenty somethings, get my ass handed to me and walk funny for a week.

It’s been hard for me. Not that I’ve ever been half the athlete Storm was, but because I feel like my body is falling apart but at the same time I’m not really any wiser. Inside, I still feel like I’m a kid.

Storm can’t play anymore. He can barely walk. He has a little sister who is probably close to pure-bred Pyr. We call her shit-for-brains because she’s earned that nickname ten times over. We got her because I’ve always wanted a a golden and the rescue said she was a golden. She sure looked like it. I’ve seen skinny dogs before, but when she showed up (she was from Texas), I was honestly shocked that she was still alive. I’ve never seen such an unhealthy dog. You could count every bone in her ribcage. Her coat was trashed. She still has major health issues, but now she’s a chonk and also is confused about her age. She should be settling down, but at least once a day she plows poor Storm over.

Anyway, Storm wants to play. But he can’t. So he’ll lay there unable to stand up and just bark at shit-for-brains. But it’s not a normal bark, it sounds like he’s had laryngitis for a month or so and has smoked two packs a day his entire life. And she’ll run around the house, freaking the shit out the cats (although, oddly, not the rabbits), spinning and barking and jumping in the air.

Storm also doesn’t really understand he’s an old man. When we go on walks, he’ll pull toward the long walk even though we all know he can’t do it anymore. I don’t mean it’s hard for him, I mean I’ll be carrying him home. He doesn’t eat much anymore, the cats will pull the alpha on him and eat his wet dog food before he’ll do it. He’s just slowing down, and yet he doesn’t seem to get it.

I have a handful of days left where he can still sit on the porch with me while I work or write or just drink coffee or whisky and pretend I’m doing one of the other two things. I’m not that old yet, fuck you very much. But I’m getting older.

I pray I’ll have a fraction of the grace Storm does. I hope I still pull on the leash for the longer walk and bark at the shit-for-brains puppy running around the house like it’s formula one even though we all know she has no traction on the hardwood and is going to slide into the corner and hit the wall. Most of all, I hope that I can sit on the porch and enjoy the sun and rain.

Storm’s pretty much deaf now so the rare times we get thunder in the PNW it doesn’t matter because he can’t hear it. But he still sits there 100% alert, keeping watch over his kids. We all know how squirrels like to kidnap teenage and (Goddess help me) adult children.

I’m looking forward to the day when I can run as hard as I want and never get tired. And I’m certain that on that day I’ll see a giant border collie doing laps around me, reminding me that no matter how fast I get, I’ll never be fast enough.